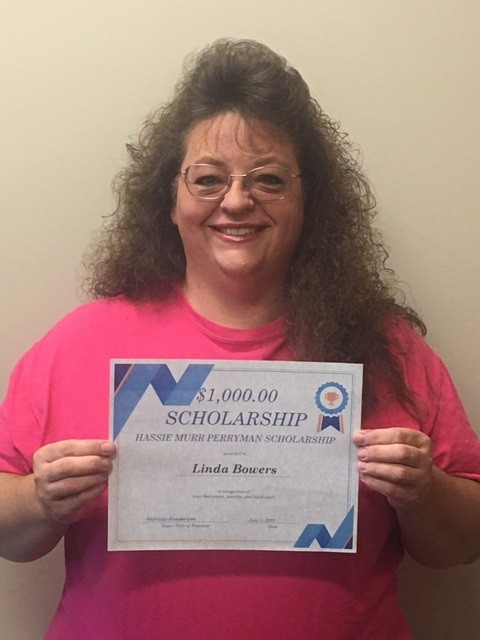 Linda Bowers of Sullivan County is proud of the fact she has accomplished two of three major goals in her life.

She wanted to get a nursing degree so she could work in the field of oncology. “I always wanted to be a nurse after I was in the ICU (intensive care unit) during childbirth,” she said.

With her two children now grown, she said she thought it was time for her to pursue Goal Number Three.

She said she enrolled in a local college but used up Pell and other financial assistance available to her in completing the prerequisites to enter the nursing program.

She said she was denied entry into the nursing program “until her grade point average improved.”

Next, she learned about the 12-month practical nursing program at TCAT Elizabethton, enrolled and was admitted in the 2020 Spring Trimester. To her surprise, she recently received a $1,000 academic scholarship to make the travels along the practical nursing academic road easier.

Hassie Murr Perryman was at nurse at the old St. Elizabeth Hospital in Elizabethton.  This hospital was a large, four-story building at 301 S. Watauga Avenue. Today it is now a part of the Ivy Hall Nursing Home.

The Hassie Murr Perryman Memorial Scholarship was founded by grandchildren William West and Mildred Patricia West to carry on Ms. Perryman’s legacy of encouraging others and helping those in need who work to improve their circumstances.

Linda Bowers is now on her way to achieving Goal Number Three and proof that “where there is a will there is a way.” She said she looks forward to becoming a licensed practical nurse and serving cancer patients with their special needs treatment during recovery for that dreadful disease.

Applications are being accepted now for the Fall Trimester (September 1, 2020 to December 10, 2020) at TCAT Elizabethton. Visit www.tcatelizabethton.edu to apply. Further information is available from Henderson at 423-543-0070, Ext. 1004.